The Church of Bangladesh 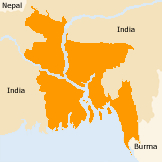 Women in the Church of Bangladesh

Women in the Church of Bangladesh have the opportunity to participate in church activities and social functions. The women and children are leading, preaching and reading scripture in the Holy Eucharist Service from time to time in special occasions.  Thirty per cent of seats are reserved for women members in the parish committee.

There is also a parish women’s committee which plays a big role in the church and community. Women also take care of the Bible school in the church.  Other activities of the women’s committee are awareness programs, family visits and prayer, retreats, prayer for patients, supporting needy students and some limited fund raising for church programs, etc.

Women and girls in Bangladesh

Bangladesh is one of the world's most densely populated countries with 150 million people, 49 per cent of whom live below the national poverty line. In addition, child malnutrition rates of 48 per cent are the second highest in the world, a condition that is tied to the low social status of women in Bangladeshi society.

Bangladesh is a highly patriarchal society and gender discrimination is evident across all levels. Women are dependent on men throughout their lives, from their fathers through to husbands, brothers or sons. The Constitution affirms gender equality, but state legislation and institutions frequently disregard women’s rights. For example, women and young girls are more disadvantaged than men in their access to education, health care and financial assets.

Traditionally, women were recognised mainly for their reproductive role, and were often discouraged from participating in public life. Due to increased poverty and demand for labour, female employment has risen since the mid-1980s. Most of the information below concerns the Muslim majority, which makes up over 80 per cent of the population. Where available, information regarding Bangladesh’s Hindu and Christian (.03%) populations is also included.

Women in Bangladesh have a comparatively low level of protection in the family context. The country has the highest rate of early marriage in Asia, and ranks among the highest worldwide. A 2004 United Nations report estimated that 48 per cent of all girls between 15 and 19 years of age were married, divorced or widowed. Traditionally, parents marry their daughters young to decrease the economic burden on the household. Increased use of contraceptives provides more encouraging evidence that the role of women in Bangladesh is changing.

In Bangladesh, parental authority is closely linked to religion. Islamic Sharia law regards women as “custodians” but not legal guardians of their children. In the event of divorce, women can retain custody of sons until age seven and daughters until youth. If a father dies, his children may be taken away by his family. Hindu law also views fathers as the natural, legal guardians of children.

Inheritance practices also follow religious teachings. According to Islamic law, daughters inherit half as much as sons. In the absence of a son, daughters can inherit only as a residuary (that is, only after the settling of all debts and other obligations). In principle, wives are entitled to half of the assets of a deceased husband. Under Hindu law, a widow (or all widows in the case of a polygamous marriage) inherits the same share as a son. For Christians, the Succession Act of 1925 provides equal inheritance between sons and daughters.

Bangladeshi women have a low level of protection for their physical integrity. Violence against women is quite common. A study released by the UN Population Fund in 2000 reported that 47 per cent of adult women surveyed had suffered physical abuse by their male partners. Early marriage and dowry customs are major factors in the ongoing problem of domestic violence.

The Prevention of Women and Children Repression Act, adopted in 2000, contains several important provisions. It identifies sexual harassment and repression as punishable crimes, and establishes a death penalty for those found guilty of rape charges. It also protects women by prohibiting newspapers from publishing photographs that identify the victims of such crimes. However, these laws have proven difficult to enforce, especially in rural areas where traditions and family customs tend to govern social life.

Gender-based violence outside the home includes sexual harassment in the workplace, assaults and rape. Acid attacks are also quite common, and are usually undertaken as an act of revenge by a rejected suitor or in response to land disputes. The government, the media and women’s rights organisations are working to raise awareness of the problem of general violence against women. However, the lack of social infrastructure discourages women from filing complaints. In the absence of sufficient shelters for victims of abuse, the government must often resort to using prisons as holding places for women who file complaints and need safe housing. This situation frequently leads to further abuses.

Bangladesh is one of the very few countries in the world in which males outnumber females, providing strong evidence to suggest that there is a problem of missing women. Census data reported by Hudson and others show that more than 2.7 million Bangladeshi women were missing in 2001. This is primarily the result of son preference, which leads to female sex-selective abortions, relative neglect of girls (compared to boys) in early childhood and abandonment.

Tradition and social norms limit the ability of Bangladeshi women to achieve financial independence. Despite their growing role in agriculture, social and customary practices effectively exclude women from any hope of direct access to land. Similarly, although national law accords men and women equal rights to access to property other than land, women own very few assets. Their situation is further impaired by discriminatory inheritance laws and cultural norms: Bangladeshi women are unlikely to claim their share of family property unless it is offered to them.

Women in Bangladesh face several restrictions in relation to civil liberties. Their freedom of movement is usually restrained to the vicinity of their homes and local neighborhoods. The Islamic practice of purdah may further limit their participation in activities outside the home, such as education, employment and social engagements. The degree of these restrictions depends very much on the traditions of individual families, but many women generally need the permission of their husbands to engage in any such activities.

Although there are no legal restrictions to women’s freedom of dress, it is customary for most Bangladeshi women to cover at least their hair.

The Garo women in Bangladesh

In the matrilineal Garo society women own property, do everything, can independently choose their husbands, and are seen everywhere doing all types of hard work in the fields and houses with an air of freedom, in sharp contrast with women in the Muslim majority society. While in the Muslim society the women are bound by many restrictions, the Garo women are equal to their men.

Nowadays Garos have lost their lands and it has made the life of the Garos difficult. They have migrated to cities to become industrial workers, beauticians, guards and housemaids, etc.

Education for women in Bangladesh

The  education of children in Bangladesh includes compulsory primary education for all, free education for girls up to grade 10, stipends for female students, a nationwide integrated education system and a food-for-education literacy movement. A large section of the country’s national budget is set aside to help put these programs into action and to promote education and make it more accessible. Recent years have seen these efforts pay off and the Bangladesh education system is strides ahead of what it was only a few short years ago.

As recently as 1991, the educational attainment of Bangladeshi women was among the lowest in the world.  Eighty per cent were illiterate.  Equipped with few skills and uninformed about health care, family planning, and nutrition, they were trapped in a cycle of dependency.

On 13 April 2011 simultaneous human chains in 64 districts of Bangladesh were held to demonstrate support for the newly proposed Women’s Development Policy, which aims to secure a more active role for women in various sectors of national life, a progressive step to ensure that Bangladesh’s women enjoy equal rights with men politically, economically and socially. Also in support of the proposed National Women’s Development Policy, on 28 April 2011 nearly 7,000 women and men gathered in Dhaka, the capital city of Bangladesh, for a Mass Assembly.