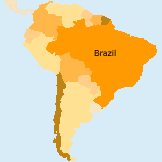 Report of the Conference held on the 20th Anniversary of the Ordination of Women to the Priesthood, September 2005: In Portuguese/ In English

At Provincial level 30% of representatives are women and women are nominated for all committees.
Ordination of women
Deacons: 5
Priests: 30
Bishops: none yet