The Church of Ireland 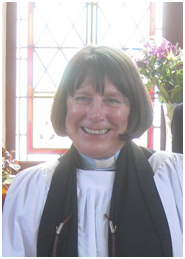 I am married with one son and one granddaughter.  Both my husband and I are retired and we live in the West of Ireland.  I was a Primary School Principal for 30 years. I still serve on a School Board of Management and retain my interests in children and their welfare through my work as the Diocesan Trainer in Child Protection. I was ordained Deacon in 1995 and priested in 1996, to serve as an NSM, in a Rural Team Ministry. After 20 years of Ministry in that area, I am now a Diocesan Curate helping out where and when needed. I am a member of Diocesan Synod, Diocesan Council, Diocesan Council for Mission and Diocesan Board of Education. I am also a member of General Synod and the General Synod Board of Education.

Over the years, I served as MU Diocesan Chaplain, Secretary, Treasurer, PRO, Faith + Policy Co-Ordinator and Vice-President. At National level I have served as All-Ireland Co-Ordinator of the F+P Unit. However, since 2010, I have just been an ordinary member.

I served as the Irish representative to, and attended, UNSCW from 2007-2009. I have been the IAWN Provincial Link for Ireland since 2007 and attended meetings/conferences in New York and London in that role. From 2009 – 2013, I carried out 2 Gender Audits, collecting statistics from all 12 Dioceses and all their Committees. Using them, I highlighted the need to encourage more participation and representation of women and youth at General Synods in those years. Because of this, there are now more women on our Diocesan and Central Committees and on General Synod. This triennial of 2014-2017 has 40% Female Lay Members, up from 23% in 2007 and 17% Female Clerical Members, up from 6% in 2007,  on General Synod.

About the Church of Ireland

The Church of Ireland covers the whole of the island even though there are two political jurisdictions. It is in a tiny minority. Population is scattered and there are few parishes in rural Ireland, with clusters of large congregations in cities and in Northern Ireland. The Church of Ireland comprises two provinces, one of which straddles the border. Three of the 12 dioceses straddle the border.

There has never been any preclusion to women sitting on decision-making bodies within the Church. Thankfully, we have seen a change for the better in gender representation on all our Church committees since 2010 (see above). This is also obvious in the secular world of workplace and voluntary groups, with women being encouraged to use their talents as leaders and organizers.

Our first female Bishop was elected in September 2013. This has been an exciting time for the Church of Ireland. The Rt Rev Patricia Storey is treated with respect by, and equally to, the other 11 Bishops and has had no problems in adjusting to being the only woman in the group. Her input is taken seriously and her contribution to decision making is regarded as equal to everyone else’s.

In 2015 there are 67 serving stipendiary women clergy, 15% of all Rectors/Incumbents.

The Mothers’ Union is the only Anglican women’s organization here and branches throughout the country are actively involved in MU projects such as Parenting and Away From It All holiday schemes, and in supporting projects that improve conditions for  families, both nationally and in local communities. It is hoped that a Vigil will be held in each Diocese in Ireland on 28 November, 2015 to mark the 16 Days of Activism against Gender Violence.

Domestic violence has finally been recognized as a serious crime by the State. Rape is also frequent. However, many victims are reluctant to report as it takes so long for a conviction to take place, and further humiliation is experienced in the courts.
High cost of housing means that both partners in a relationship go out to work to pay high mortgages. This in turn causes family problems. Due to the worldwide recession many people lost their jobs and could not pay their mortgages, resulting in many evictions. High cost of rents has also added to the many homeless families in our larger cities.

Childcare is very expensive for those parents who have work and need both salaries to pay high rents or mortgages.
Better facilities are needed for the integration of immigrants, although the situation has improved greatly over past few years.