The Anglican Church of Melanesia 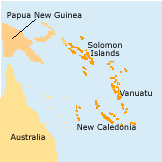 Environment and resource management: for example, poor forestry practices are spoiling water sources, and as women are the traditional carriers of water, they have to travel a lot further to obtain water for the family;

Health issues: HIV/AIDS - just starting to take off in the Solomon Islands; Corruption and poor governance, which adversely affect law and order (and thus personal security), and provision of health and education;

Politics: Lack of representation of women in politics - for example, in the Solomon Islands there has only been one women in parliament for one term since independence in 1978.

Education: High School Fees - there is no free education, and at the secondary level school fees are up to 50% of the average family income. As a result families have to choose which one of their children will be put through high school as far as is possible, and most families choose to put a boy through high school, meaning very few women have completed secondary education; This is reflected in poor literacy rates, especially among women.

Women have played a very important role in peace-making and reconciliation, particularly in the Solomon Islands following the ethnic tension.

It would appear that the opposition to the ordination of women is largely based on cultural rather than Biblical and theological grounds, and those women who have graduated from BPTC are hesitant to pursue ordination in the face of cultural conservatism. It is likely that the first ordained women will probably be in one of the religious orders and have a ministry primarily in that religious order where cultural objections will not be as significant and the environment more supportive.

Women's groups in CoM use MDGs and BPfA in their programs. The Inclusive Communities Program