The Episcopal Church in Jerusalem & The Middle East 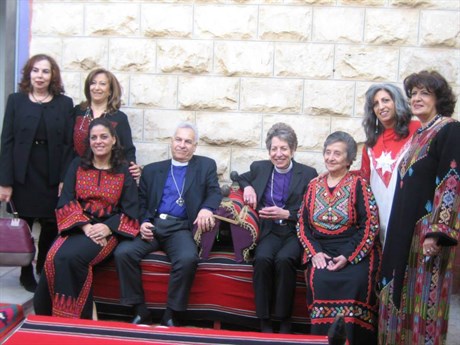 IAWN Contact: Leila Diab, third from the right in the photo.

Living in the Middle East these days is a big challenge, yet it is a great blessing since we come from an area which is considered The Holy Land...the Land where the Prince of Peace was born and the three Abrahamic religions arose.

Our part of the world and our region in particular has been struggling through different upheavals since the days of the Ottoman Empire, the 1st and 2nd World Wars and the British and French Colonization. Years later it was affected by the Palestinian/Israeli conflict and later on with the Lebanese War, and the Gulf War. The instability in the region continued later with the Arab Spring in most Arab countries, shaking the whole of the Middle East.

Living in Jordan is undoubtedly a blessing since peace and stability prevail and progress takes place every other year. Yet challenges continue to be in the forefront of our diocese; particularly in women's issues.

Women's issues in our area include women's work in the church and in the community as well.   Some major issues that continue to be discussed are gender issues.  Our church system continues to be patriarchal, in spite of all the progress achieved through the last years.   Women continue to be an integral part of the church society but male leadership is in the front.  One cannot deny that our women continue to be represented on boards of institutions, church committees and other positions in the church. The issue of women's ordination seems still to be far away in our diocese. There are controversial ideas about it due to our Middle Eastern background, Islamic influence and the amalgamation of Eastern churches, etc.

Of course with the present instability in the region and the problem of wars and refugees in the area, women are challenged with more difficult issues. There is first and foremost the problem of poverty, lack of education, gender based violence, sexual harassment, and early marriages. This is undoubtedly the outcome of wars particularly in Palestine, Iraq, Syria and Lebanon. Women and children are the greatest victims of war. They are the ones who suffer in their community, and in their family.   The problem of refugees has erupted at a time when the Middle East was suffering from economic instability, and sources of income were scarce.   World UN offices have jumped in helping refugee camps like Zaatari camp and others in Jordan and others in Lebanon. What is frustrating now is that Syrians outside the camp who were on aid programs got SMS messages informing them that aid will stop soon due to lack of funding.  UNRWA schools that have been sponsored through international donations have been facing the problems of closing down due to the fact that International donations have decreased.  So education continues to be a problem for young women in the area as well.

Training for refugee women and women awareness programs have been sponsored by some of our churches together with some leadership programs.  Financial aid and helping in kind has been part of the work of the church as well.

Many of the refugees are fleeing out of their countries with women and children into Europe where they are given refuge, while in other places they are denied any aid.  They are faced with many troubles while at sea. Some drown or die of hunger, like the little angel found dead at the border of Turkey.  He, his brother and mom were the victims of this bad war and the whole universe shattered at this sad incident.

The female foreign domestic labourers from countries such as the Philippines, Sri Lanka, Kenya, Ethiopia, continue to find life challenging, both for them, and their employers.  There are studies now for protecting women’s rights: relevant procedures are made simpler, to avoid maltreatment or harassment.  On the other hand, employers also face problems with the helpers and hence various issues arise.

In the Diocese of Jerusalem we continue to work as a diocesan women's committee, one in Jordan and another in Palestine with the support of Archbishop Suhail Dawani, and under the leadership of Shafeeqa Dawani who is the head coordinator of these committees.

Our women are represented at international conferences and workshops. On Friday 18 September we had a big meeting in Jordan and Reem el Far who attended the UN Commission on the Status of Women in New York in March this year presented on the issues of concern that were discussed. We hope that we will have a new strategy for issues of concern for our women.

Finally, I would like to add that involvement of young people in women's work in the diocese is becoming more difficult. This is due partly to their involvement in other important issues.  But it is also because Christians  are emigrating from the Holy Land and the Arab World due to lack of resources, lack of funding and the danger of ISIS.