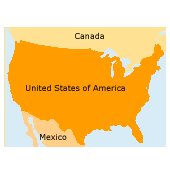 Women are present but not equally represented on decision-making bodies.
The Executive Council Committee on the Status of the Women is doing a survey of dioceses to ascertain the portion of women in major decision-making bodies and positions of the dioceses, and of the committees and commissions reporting to General Convention, which will be included in the report to the next General Convention in 2009.
Ordination of women
Deacons: First ordained in 1972
Priests: First ordained in1976. 2,260 active Priests
Bishops: First ordained in 1986. 15 Bishops and one Presiding Bishop (Primate)
The Executive Council Committee on the Status of Women, working with the Church Pension Group, is seeking to get better statistics on the positions and career paths of women clergy vis-à-vis men.

Activities related to the MDGs and Beijing Platform for Action

The General Convention of 2007 set the MDGs as a priority work for the whole church. There is work on every front for the MDGs. Many dioceses have set aside the 0.7 % of their budget for development.
Women's Ministries supports the Beijing Circles which promotes action on the Beijing Platform for Action (BPfA).

(Italics = organisations that work on MDGs but not specifically women)
Church: Women's Ministries is the Office at the Episcopal Church Center that supports women in the Episcopal Church and the wider world.  This office works collaboratively with women's organizations in the Church, other program and ministry groups at the Episcopal Church Center, global and local networks working for gender justice, as well as individual women within and outside of traditional church structures. For more information see: http://www.episcopalchurch.org/women .
Women's organisations include:

Many organizations are involved with promoting the Millennium Development Goals and Beijing Platform for Action, including: Compass Rose; Episcopalian Peace Fellowship, Episcopalians for Global Reconciliation, Episcopal Relief and Development.