The Church of the Province of Uganda 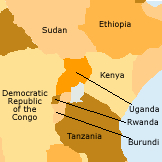 The self-perception of women as the weaker sex, coupled with the Church teaching of the same in a traditional setting, with similar values creates a vicious cycle of women disempowerment.

Provincial Assembly agreed in 2007 to have women as 30% of Assembly representatives. Women sit at all levels of the Church, including the highest levels of decision-making bodies.

Deacons: none at the moment
Priests: women have been ordained as priests

Women are ordained. Some have been canonised

Activities related to the MDGs and Beijing Platform of Action