The elimination of all forms of violence against women and children, including trafficking, is one of IAWN's priority concerns. Below are some resources to help us raise awareness and take action. 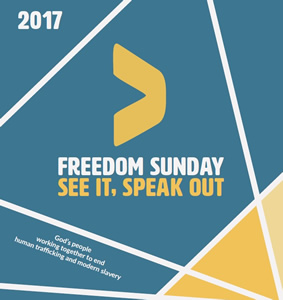 Freedom Sunday 2017: This resource has grown out of an ongoing shared journey by faith communities in the UK working to end human trafficking and modern slavery. The theme for 2017 is ‘See It, Speak Out’

Freedom Sunday Resources for Prayer and Action 2015: This pack produced by several Churches and Christian agencies contains prayers, sermon outlines and Bible studies for use in church services, as well as an action pack for congregations and individuals

Mobilising the Church to help end modern slavery: The Clewer Initiative enables Church of England dioceses and wider church networks to develop strategies for detecting modern slavery in their communities and help provide victim support and care. Watch a video about the initiative here.

The Episcopal Church has two on-line hubs of diocesan and other resources to assist churches in responding to human trafficking, see here and here, and a Facebook page Episcopalians Against Human Trafficking.

Human Trafficking and Modern-Day Slavery (2014), by Mission Theology Advisory Group UK. It includes description of various forms of human trafficking and ways how Christians should respond to this issue.

To be Silent is to be Unfaithful (2013) by the Church of Scotland. It includes case studies, a contextual Bible study, and liturgical resources.

Stop the Traffik: People shouldn’t be bought and sold is a global movement of individuals, communities and organisations fighting to prevent human trafficking around the world.

United Nations Office on Drugs and Crime (UNODC)  section on Human Trafficking offers a wealth of information and resources.

UNODC Global Report on Human Trafficking (2009).  An Executive Summary of this report in English, French, Spanish.

United Nations Global Initiative to Fight Human Trafficking (UN GIFT) promotes the global fight on human trafficking on the basis of international agreements reached at the UN. Victims of human trafficking can be found in a variety of situations.  UN GIFT has listed a number of indictors to assist in identifying such victims: English, French, Spanish.

Tackling newer emerging vulnerabilities leading to trafficking in children and women in Bihar (2008). The report of a multiple stakeholder Consultation organised by the Diocese of Patna, Church of North India includes a ‘Plan of Action for Combating Trafficking of Women and Children in Bihar’.

The UN ‘Trafficking in Persons Protocol’ (2000) to prevent, suppress and punish trafficking in persons, especially women and children is supplementing the United Nations convention against transnational organised crime.